This is a game about the eating disorder anorexia nervosa, a phenomenon that is often highly incomprehensible to people without first hand experience and freight with misconceptions (e.g. anorexics starve themselves simply to look thinner).

Play Instructions Personnel
Nobody really knew about it, people just thought I had disappeared for a while. 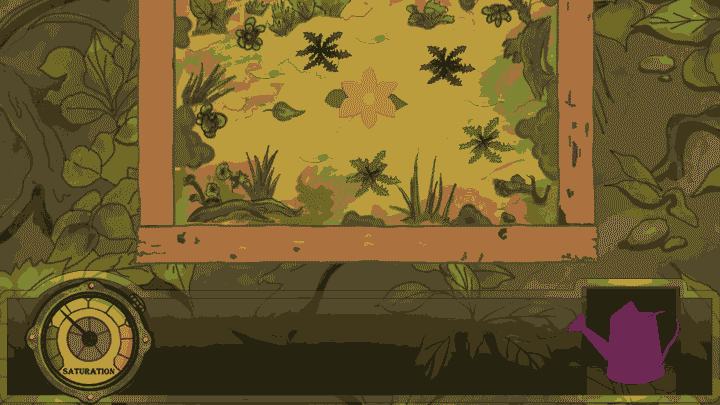 Playing with Perceptions of Beauty and Perfection

Perfection plays with perceptions of beauty and perfection to enable an experiential understanding of why someone would starve themselves. The game’s core metaphor is the body as garden. The game’s main premise is that a perfect garden is devoid of slugs and weeds. To achieve perfection, the player is asked to eliminate these unwanted elements until only the main plant in the middle is left.

The conflict of the game revolves around garden saturation (as indicated by a saturation meter in the bottom left corner of the screen). Watering the garden increases its saturation. The weeds flourish and the numbers of slugs rise. Eliminating slugs by moving the mouse over them in a scrubbing motion decreases saturation, as does parching the garden. Also, de-saturation is the only way to get rid of the weeds.

The game is structured in three stages (metaphorical representations of increasingly higher weight-loss goals). ‘Winning’ a stage is accompanied by expanding garden walls, which are prison and perceived protection at the same time. At the end of stage three, when no more weeds and slugs are left, the Perfection ending is reached. This ending, though, raises the question whether it truly represents a win state…

There is another ending hidden in the game that sheds a different light on the game’s assumptions and suggested rules to achieve Perfection. To reach it, players have to question the rules, closely observe all the elements in the game-space and explore different behaviors for a different outcome.

Special Instructions: This game is best played in Google Chrome and requires a mouse. The game does have two endings and can be won. Don't give up after the "Perfection" ending. Reading the texts on the screens between stages helps. There is a ‘What it all means’ page in the game that explains the metaphorical meaning of all game elements. You might want to read this after having played the game.

Controls: Mouse controls: click the watering can to water the garden. Once a weed has turned brown, you can get rid of it by moving the mouse over it, clicking and holding the left mouse button to grab it and drag and drop it over the garden wall. To scrub away slugs, mouse over them, hold left mouse button and vigorously move over them in an intense scrubbing motion, like removing a stubborn smudge with a sponge.